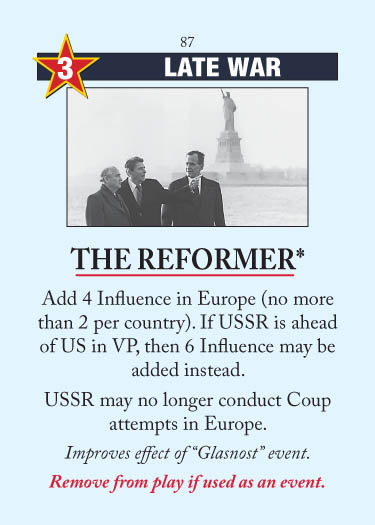 Successor to the short-lived premiership of Konstantin Chernenko, Mikhail Gorbachev was the only Soviet leader to be born after the Russian Revolution of 1917. His experience within the Politburo gave him broad exposure to the West which profoundly affected his thinking about the USSR’s future. “Gorby,” as he would be known in the West, inspired a sort of fan following. Margaret Thatcher famously remarked on his coming to power “I like Mr. Gorbachev—we can do business together.” Ultimately, Gorbachev would oversee the dismantling of the Soviet bloc. While his reformist agenda, including Perestroika (economic reform) and Glasnost (political freedom) made him extremely popular in the West, it made him less so in the Soviet Union. Ultimately, Gorbachev would be removed from office as the result of a reactionary military coup in 1991. In the wake of its failure, the Russian Federation would turn to a newly minted hero, Boris Yeltsin.

An outstanding event.  The standard effect is very strong (like Ussuri River Skirmish), and the enhanced effect is irreparable in a single Action Round.

The Reformer can be used either on offense, defense, or both.  It defends against the US Late War incursion into Eastern Europe, and it can place a significant amount of influence into the Western European battlegrounds.  West Germany is probably too difficult to flip because of its stability, but Italy and France are both vulnerable.  Plus, you can dump extra influence into US non-battlegrounds and break/gain Domination (and in the case of Canada, pause NORAD).

That being said, do not hold this too long waiting for that negative VP score, as otherwise the US might draw and be able to play Glasnost as a -2VP ABM Treaty.

Send Mr. Gorbachev to space, every time.  Improving Glasnost is very bad for you, and adding 4-6 influence with only 3 Ops to counter is problematic as well.

This entry was posted in Late War, USSR Events and tagged the reformer. Bookmark the permalink.

3 Responses to The Reformer