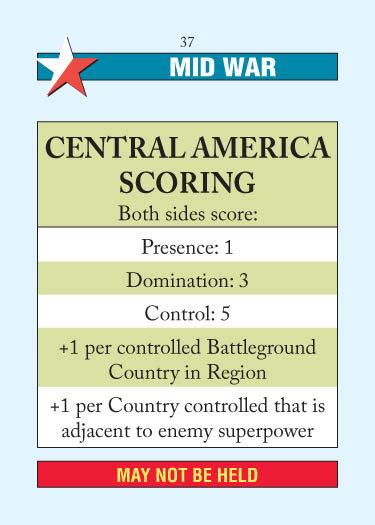 Central America and the Caribbean were frequently termed America’s “backyard” and “lake.” With the advent of Fidel Castro in the 1959, Americans could no longer take the region for granted. The US reaction to communist influence in the area provoked direct US military intervention in the Dominican Republic (1965) and Grenada (1983). In the closing years of the Cold War, Nicaragua, El Salvador and Honduras, became frontline states in the struggle between the superpowers.

If I had to pick one region to ignore, I’d probably pick Central America.  Not that it isn’t important, but by definition, one of the regions has to be the least important, and that region is usually Central America.  Domination is a measly 2VP bonus, meaning that Dominations usually score at +3VP for the US, and it’s very difficult to hold onto Domination because almost all the non-battlegrounds are so volatile and low-stability.

On the other hand, the region’s main role in the game is a point source for the USSR.  In general, the USSR is going to benefit a lot more from Central America scoring because Mexico/Cuba essentially score double.  And although the US theoretically has easier access to those battlegrounds, Fidel in practice often sews up Cuba for the USSR, and an early game coup of Panama can leave the Gulf of Mexico feeling very communist indeed.

Central America does offer the potential for one of the easiest Dominations in the game.  As US, a fortified Panama with control of Costa Rica can easily keep the USSR out of the region and allow an easy +4VP.  More commonly, both sides get into the region, and one country will control two battlegrounds, while the other tries to take a lot of non-battlegrounds to stop Domination.

The USSR often ends up with difficulty getting out of Cuba; without a coup or Liberation Theology, they don’t really have a shot at Panama or Mexico from Cuba.  In addition, Cuba and Mexico are extremely vulnerable to US realignment, made all the more volatile by their adjacent 1-stability realignment-modifying non-battlegrounds.

The USSR has Fidel, which is a pretty easy route into Cuba.  Although theoretically De-Stalinization could place influence here, it is not worth it: Panama is more easily couped, Mexico is easily realigned, and Cuba is likely yours anyway.

The US rarely plays here in the Early War.  Once in a while you might shore up Panama, or add an influence into Costa Rica, but otherwise that’s that.

The primary USSR event here is Liberation Theology.  This is like Decolonization for Central America, in a way, and it is often a lifesaver because the USSR has a difficult time moving out of Cuba and into Panama or Mexico without a coup.  Che ostensibly provides some support for the region, but the USSR’s chances are really somewhat defined by their coup success and Liberation Theology.

The US does not really need events for Central America: their Mid War events (OAS Founded, Nuclear Subs, and The Voice of America) are often better used in other regions.  The main exceptions are Panama Canal Returned, though even that is most useful for getting into Venezuela; Puppet Governments, which if it comes out late enough is probably best used to just grab a whole bunch of Central American non-battlegrounds; and Alliance for Progress, the “US OPEC” which just gets better and better as the game goes on.

Likewise, the neutral events are often too valuable to be used in Central America, but Junta, ABM Treaty, and Brush War can all flip a country very easily.  Junta in particular can be used for some brutal realignments by either side.

Latin American Death Squads is theoretically most helpful here, because a Domination fight often ends up turning on who controls more non-battlegrounds, as both sides coup the 1-stability non-battlegrounds back and forth.

The only events of note here are Yuri and Samantha, which accomplishes much the same thing that Latin American Death Squads did in the Mid War, and Ortega Elected in Nicaragua, which is a pretty lousy event but a DEFCON-suicide card for the US if the US has influence in Cuba.