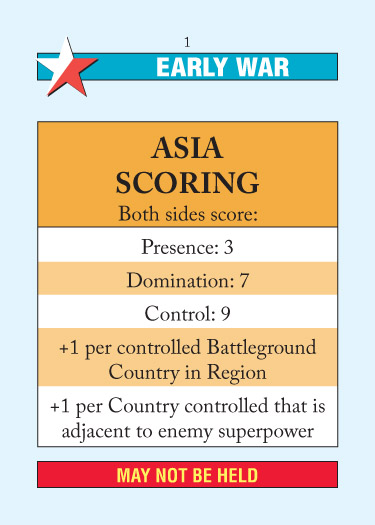 While Europe may have been the object of the Cold War, Asia was the battleground. From the Chinese Civil War, to the Korean War to Vietnam and Afghanistan, Asia was the place where the Cold War came closest to growing hot. For this reason, Asia is the second most significant region for scoring.

The Early War (more specifically, Turn 1) is more or less a fight for Asia.  It’s difficult to get anything done in Europe, and the USSR enjoys several major advantages in the Middle East.  This leaves Asia as the one region the two sides will clash over most.  Whoever comes out of the Early War with Asia domination will likely keep it for the rest of the game, though the omnipresent threat of the China Card keeps Asia very much hanging in the balance.  The fact that it can’t be couped at DEFCON 3 means that the US will often make a control-breaking play in Asia on the final AR of a turn, so on the next turn, the USSR is forced to choose between its battleground coup or repairing the damage in Asia.

The key to Asia lies in the very first Action Round of the game — the Iran coup.  If the USSR is able to rid Iran of US influence before the US has a chance to spread into Afghanistan or Pakistan, then the only question is whether the USSR is also able to grab Thailand or South Korea and therefore score domination.  But if the USSR is unable to keep the US out of Iran, then the tables are turned, and it is the USSR that must successfully defend both Thailand and South Korea to prevent the US from dominating Asia.

In other words, whichever side comes out of Iran by the end is likely going to be able to take Pakistan and India.  The USSR starts with North Korea, and the US has de facto control of Japan.  Accordingly, South Korea and Thailand are the keys to Asia, and are therefore much of the focus of Turn 1.  The US has easier access to these countries, but the USSR will look to make use of the Korean War, Vietnam Revolts, and Decolonization to even the playing field.

The one wild card in all of this is the Indo-Pakistani War, which can dramatically change western Asia.  Skilled players that suspect an Indo-Pakistani War will make sure to shore up Pakistan’s and India’s neighbors before committing to Pakistan and India entirely.  But you won’t always have the tempo to do all of this before Asia Scoring, and India in any event can never be entirely safe from the War.

As the US, it is also possible to deny domination to the USSR by grabbing all the cheap countries and ending up with a higher overall country count.  As there are 15 countries on each side, the US only needs to grab 7 countries in addition to Australia to guarantee that it cannot be dominated, even if it loses the battleground war 4-2.  This is easily achieved if you take Thailand and its neighbors in Southeast Asia, and possible (though unlikely) if the USSR took Thailand.

Formosan Revolution can sometimes turn the tide in favor of the US, but it’s only relevant if the two sides split the battlegrounds 3-3 and Asia Scoring triggers before the US uses the China Card.  It is generally a harmless 2Ops for the USSR and not worth the event for the US.

In the Mid War, several important Asian events enter the deck.  Southeast Asia Scoring raises the stakes, and the China Card cards (Nixon Plays the China Card, Ussuri River Skirmish, and Cultural Revolution) all make their presence felt.  Of these, Ussuri is easily the most influential; although it’s not very important if the US is already dominating, it can quickly turn USSR domination into US domination when followed up with the China Card.

On the whole, however, the Mid War is mostly a fight for the new regions: Africa and the Americas.  By this point, Asia is frequently already locked down, and you need a gamechanger (Brush War, Red Scare/Purge, Ussuri River Skirmish, or the China Card) as well as high Ops cards to make any headway.  Nevertheless, Asia is sufficiently high-scoring that it’s probably worth overcontrolling your key battlegrounds as a prophylactic measure against such gamechangers.

The fact that there is an even number of battlegrounds means that it is very difficult to flip your opponent’s Domination into your Domination.  Therefore, Asia tends to be most contested when neither side exits the Early War with Domination.

Shuttle Diplomacy is generally less helpful than it appears.  The reason is that the USSR typically leads in battlegrounds 4-2, in which case the saved battleground is rather meaningless.  However, if the battlegrounds are split 3-3, then Shuttle Diplomacy can be a nice one-time domination if the US has enough countries overall.  It is essentially an uncertain 5VP card, depending on the board, how the USSR responds, and which scoring card triggers first.  Although it’s not much of a big deal for the Middle East, it can be rather more potent in Asia.

No Late War event explicitly targets Asia.  (Soviets Shoot Down KAL-007 gives the US an outstanding headline if they control South Korea, but doesn’t necessarily help them in Asia.)  Although it is possible for Asia to flip from one side to another, in practice, at this point Asia is just as locked down as it was through the Mid War.  The China Card (and its associated events) continue to ensure that Asia is never entirely decided until the end of the game, but Asia is generally the least volatile region in the Late War.

This entry was posted in Early War, Neutral Events, Regions and tagged asia. Bookmark the permalink.