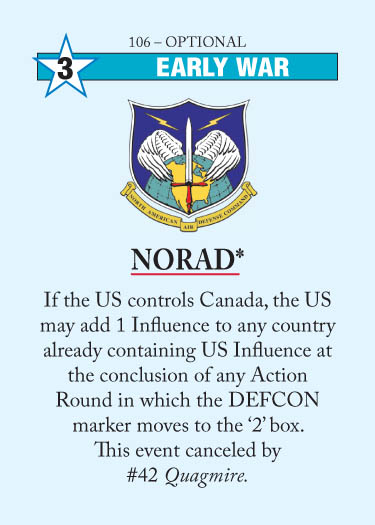 The North American Aerospace Defense Command is a joint military organization sponsored by the governments of Canada and the United States. Its mission is to jointly monitor and control the air space over North America from unfriendly incursion. It was founded initially to protect against the threat of low flying Soviet bombers attacking from the Arctic region. During the Cold War, the Command was famously housed in the Cheyenne Mountain facility depicted in the film Wargames. At its height, NORAD commanded 250,000 military personnel. The command illustrates the full integration and cooperation of US allies into the US nuclear umbrella and alliance structure.

Time: Early War
Side: US
Ops: 3
Removed after event: Yes

This is a controversial event.  Some think it’s useless and too expensive to activate; others consider it the among the best US events in the game.

Certainly, however, everyone is in agreement that it’s not a great card for the USSR to draw, because it’s a bit too good for the USSR to play it for the US.  Accordingly, I like to space this card as USSR, but find that I often can’t spare the Ops.  In particular, on Turns 1 and 2, I’ll usually just play it for Ops because the event is not particularly useful until the Mid War.  But if I am able to, I will send this to space rather than deal with the consequences for the rest of the game.

NORAD has an unusual counter in Socialist Governments, which is an all-around good USSR headline, but especially useful to defuse NORAD for an Action Round.

When NORAD goes into play, it becomes more important to overprotect your controlled battlegrounds, especially your 2-stability battlegrounds, if the US has influence in them.

NORAD is most annoying when you drop DEFCON to 2, because the US gets an influence and then gets to play immediately afterwards.  If the US drops DEFCON to 2, then it’s not as much of a problem to deal with.  This suggests that in AR7 play situations, NORAD’s presence sometimes means that you should be willing to give up the battleground coup.

NORAD makes it important to control Canada.  The best way to do so is to let the USSR do it for you: Marshall Plan and Special Relationship can often provide the boost you need in Canada without having to invest any of your own influence.

The real problem with triggering NORAD is giving up its 3 Ops.  On Turns 1 and 2 in particular, I tend to play NORAD for the Ops and hope it comes back to me early enough in the Mid War.  By Turn 3, I will generally try to spare the Ops rather than punt it until Turn 7 at the earliest.

The best way to make use of this is to have influence in USSR-controlled battlegrounds.  2-stability battlegrounds in otherwise DEFCON-restricted areas are great targets; the African battlegrounds are as well, but those are generally less stable and swing back and forth much more than say, Libya.  In addition, the USSR’s Asian battlegrounds, even the 3-stability ones, are excellent places for NORAD because the 5 Ops of the China Card allow you to flip more stable countries.

NORAD somewhat clashes with the typical US goal of lowering DEFCON to 2 in the headline phase.  In other words, by preventing the AR1 coup, you miss out on NORAD’s compensation for that coup.  It does, however, work nicely with ABM Treaty and SALT Negotiations, both of which can cause DEFCON to go to 2 multiple times in a turn.

An active NORAD makes Quagmire even more unplayable, not that you wanted to play it on yourself before anyway.

This entry was posted in Early War, US Events and tagged norad. Bookmark the permalink.