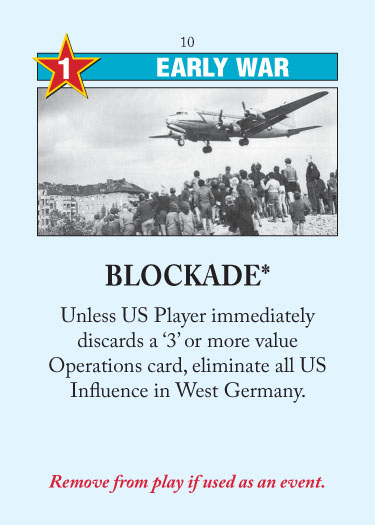 The Soviets attempted to increase pressure on the Western allies to dissuade them from creating an independent “West” German government in their zones. The primary pressure point was a blockade of West Berlin. In response, the UK and US launched the Berlin Airlift, which at its peak during the “Easter Parade,” had a cargo plane landing in Berlin every minute.

Every USSR player is entranced by Blockade and the opportunity to take over Europe‘s most stable battleground.  But most play it poorly.  Beginner USSR players will do things like headline Blockade or play it in the middle of a turn.  Better USSR players play Blockade slightly better (e.g., on their final Action Round), but still poorly.

Strong USSR players know that strong US players do not forget about Blockade, and so will either play it for Ops and let Blockade come back later in the game (maybe the US will forget about it then?), play Blockade when US is Purged (which is very strong, because there are no Soviet 4Ops events in the Early War), or count the Early War cards and play Blockade only when US has no more high cards.

Always have a 3 Ops USSR event on hand until Blockade is gone!  If the USSR punts it away on Turns 1-2, you have no choice but to be wary of Blockade throughout the Mid War.  Accordingly, even if you get the chance to send Blockade to space (via Containment) or play it with UN Intervention, it’s often better to just trigger the event so you don’t have to worry.

If you draw Blockade, it’s usually not a problem to deal with.  If you have no 3Ops or higher card (maybe you were Red Scared?), Blockade is going to be your hold card, and you’re going to like it.  As above, it’s important to note that if you do draw Blockade with De-Stalinization or Decolonization before Turn 3, you simply won’t have the ability to hold those cards until Turn 3 without playing the China card.  So you’ll usually have no choice but to discard De-Stalinization or Decolonization before the Turn 3 reshuffle.

If you must trigger Blockade and you have no card to discard to it, then make it an AR7 play (AR6, technically, in this case), which will help mitigate the damage.  And who knows, maybe you’ll be in luck and the USSR will play Containment and you can either space Blockade or discard a 2Ops card.

Riku Riekkinen suggests that if you have Blockade and Decolonization or De-Stalinization in your hand on Turn 1, then you should consider an opening setup that leaves West Germany empty.  The goal is to be able to play Blockade without discarding any cards, thereby allowing you to hold Decolonization/De-Stalinization until Turn 3.  With an empty West Germany, the USSR is forced to choose between couping Iran (and allowing the US to play into West Germany with Blockade on AR1 without discarding any cards), or taking West Germany (and allowing the US into Afghanistan). A good example of this play can be seen in Annotated Game #2.

This entry was posted in Early War, USSR Events and tagged blockade. Bookmark the permalink.