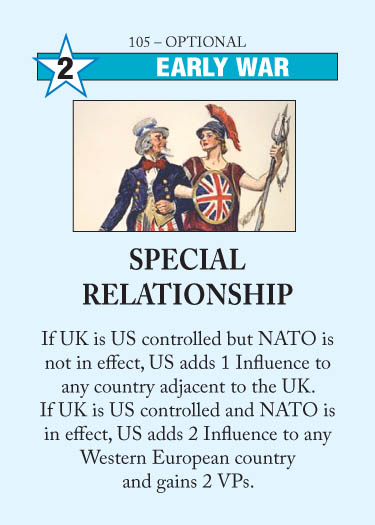 The Special Relationship is a phrase used to describe the exceptionally close political, diplomatic, cultural, economic, military, and historical relations between the United Kingdom and the United States, following its use in a 1946 speech by British statesman Winston Churchill.  During the Second World War, the development of the atomic bomb required collaboration and trust between the British, Canadian, and American governments to a degree perhaps previously unimaginable. Additionally, in 1943, Britain made the crucial decision to share ULTRA codebreaking results directly with US intelligence. This relationship blossomed into the BRUSA Agreement, whose terms guided intelligence sharing throughout the Cold War. Even today, the UK and US remain the closest of allies, sharing military bases and economic ties throughout the world.

Time: Early War
Side: US
Ops: 2
Removed after event: No

Depending on whether Special Relationship is NATO-activated, this can be either a minor annoyance or an irritating source of US VPs.

The best case scenario is when the US doesn’t control the UK.  This will happen somewhat naturally from Suez Crisis; the US usually has too many priorities for its influence than to repair the UK early on, and so you can often get away with a no-effect Special Relationship.

If the US does control the UK, but NATO is not in effect, then look to its neighbors.  If the US already controls both France and Canada, then you can consider the influence to be moot and safely disregard the event text.  If they don’t control Canada, then try to delay playing Special Relationship until they do.  In the worst case scenario, where you control France, you’ll have to spend at least one Op of Special Relationship to repair its damage.

Once Special Relationship is NATO-activated, it becomes much more powerful.  A competent US player will never trigger NATO, but you almost certainly will, because its 4 Ops are too much to pass up.  So if you hold both in the same hand, you should play Special Relationship first.  (As discussed in the NATO article, this is also good reason to try to delay Warsaw Pact Formed and Marshall Plan, so you can punt NATO for no effect.)

If you do hold Special Relationship in a post-NATO world, you can either use the two Ops of Special Relationship to try to break UK control before triggering the event text, send the card to space (though there are many good US candidates for the Space Race around this time in the Mid War), or just bite the bullet and accept that it’ll cost 2VP to use 2 Ops (assuming, of course, that you are fine with giving the US two influence in a western European country).

If Special Relationship is not NATO-activated, then there is obviously no point to playing it for the event, since you can (almost) always use its 2 Ops to duplicate its effect (the exception being if you are under Red Scare/Purge and want to use Special Relationship to break USSR control of France).

If Special Relationship is NATO-activated, then it becomes a somewhat tempting event: the 2VP is quite nice by itself, and the two US influence is helpful if the USSR controls Italy or France.

You should never, however, play NATO to boost Special Relationship.  NATO is one of the crappiest events in the US arsenal, and it should only ever be triggered by the USSR.

The real benefit of Special Relationship is that the USSR is often forced to play it for you.  This is a good reason, therefore, to control the UK: Suez Crisis will wipe out one or two influence, and occasionally Socialist Governments might take one out of it as well.  I wouldn’t go out of my way to control the UK, especially if NATO hasn’t been activated, but you should make sure that at least one influence from Marshall Plan makes its way to the UK.  Once NATO has been activated, if Special Relationship is still in the deck, then I would definitely drop a spare influence into the UK when you have a chance.

Along the same lines, in the Early War, if you do control the UK but NATO has not been activated, it’s to your benefit not to immediately control Canada, so that you have a useful place to drop the influence from Special Relationship.  Of course, sometimes you will have to control Canada before he plays Special Relationship, in which case you’ll have to settle for overcontrolling France.

This entry was posted in Early War, US Events and tagged special relationship. Bookmark the permalink.