Our Man in Tehran 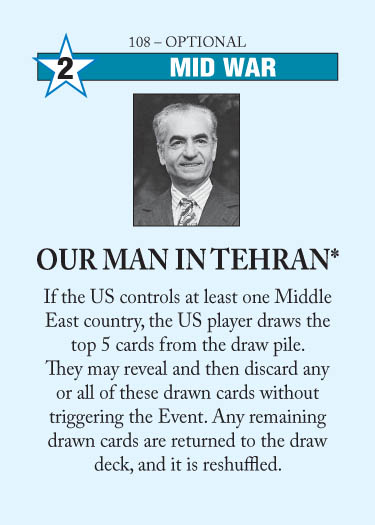 Our Man in Tehran

Replacing his deposed father, Mohammad Reza Shah Pahlavi was central to first British and then American plans for the Middle East. While Pahlavi undertook the mantle of western reformer, he often chafed under neo-imperialist economic relationships, particularly where oil was concerned. Nevertheless, Iran’s oil wealth spurred Pahlavi into the center of global geopolitics and his association with the United States  was vital for both nation’s positions in the region. However,  whatever outward elements of reform Iran projected, Pahlavi also used a brutal internal police force, the SAVAK, and turned despotic and megalomaniacal in the later years of his reign. This was all the opening required for Iran’s seething revolutionary elements.

Time: Mid War
Side: US
Ops: 2
Removed after event: Yes

Our Man in Tehran hovers just at the border of send-to-space and suck-it-up.  If I can spare the Ops, I like to send it to space, but I rarely can, and so I often just end up playing it and hoping the US doesn’t find anything good.

If you’ve already seen the important cards (good scoring cards or good USSR events like Lone Gunman, We Will Bury You, Decolonization, Muslim Revolution, OPEC, etc.) go to the discard, then it’s not a big deal.  It’s also not a big deal in the rare situation where the US controls no Middle East country, or only controls a single one (and you can use the Ops to break control of the country).  And although it is slightly less effective on Turn 6 then at other times, that alone is not enough reason to feel safe about playing it.

A very nice event and one I almost always trigger.  It is worst on Turn 6, but even then it is better than its 2 Ops, especially if you have not yet seen an important card you wish to discard.

This entry was posted in Mid War, US Events and tagged our man in tehran. Bookmark the permalink.

11 Responses to Our Man in Tehran