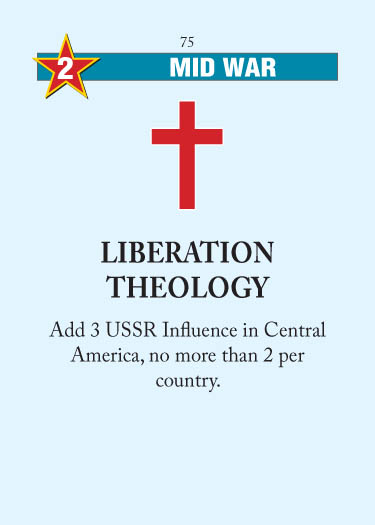 An outgrowth of the Second Vatican Council, liberation theology stresses Jesus Christ as liberator. The theological strain that sustained this outlook originated in Latin America and flourished there, particularly with the Jesuit order. While never embraced by Pope John Paul II due to its Marxist undercurrents, liberation theology remains very popular with individual priests and the laity in the third world. Its emphasis on social justice and its critique of capitalist excess has, however, been incorporated into broader Church doctrine.

Time: Mid War
Side: USSR
Ops: 2
Removed after event: No

It is often used to get to Mexico, otherwise inaccessible as Fidel gets you Cuba and Panama can be couped.  Beware being realigned out of Mexico, however, especially if you lose Guatemala.  You can also use it to grab a lot of non-battlegrounds to cement your or deny their Domination.

One of the few genuinely unpleasant Mid War USSR events.  I usually send this to space, particularly if the USSR has no access to Central America.  Even if they do, it takes 3 Ops to repair the damage, and so it’s usually just easier to send it to space rather than preemptively fortify the region.  In addition, Central America Scoring is often decided by non-battlegrounds, and Liberation Theology can very inconveniently take a whole bunch of non-battlegrounds all at once.

One of the main ways to defuse this card is to make sure to play into Mexico.  Most US players get complacent about their southern border, and end up losing it to Liberation Theology before they had a chance to contest it.  Yes, you can realign the USSR out, but I’d rather not have to worry about it in the first place.

This entry was posted in Mid War, USSR Events and tagged liberation theology. Bookmark the permalink.