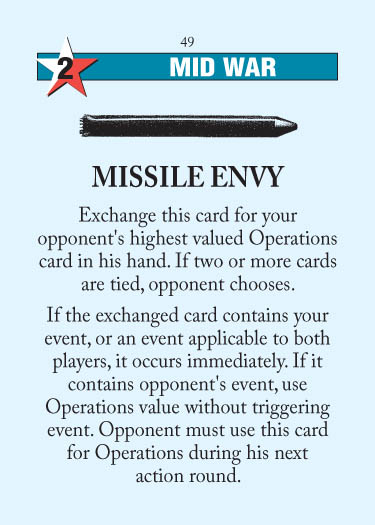 A term coined by Dr. Helen Caldicott, it reflects the general feminist critique that the Cold War was driven by male ego with very Freudian undercurrents. When one examines the terminology of “deep penetration” and “multiple reentry” one wonders if she had a point. Caldicott went on to found Physicians for Social Responsibility, and her book became a rallying point within the anti-nuclear movement.

Time: Mid War
Side: Neutral
Ops: 2
Removed after event: No

Yet another excellent Mid War neutral event, though its capacity for DEFCON suicide keeps it a tier below ABM Treaty / Junta / Brush War / SALT Negotiations.  When I draw it, I will usually headline it whenever possible.

There are four possible outcomes with Missile Envy:

1. You are forced to trigger an unfavorable event.

This is the worst case scenario with Missile Envy.  For starters, DEFCON suicide is eminently possible if DEFCON is at 2 — but even when it is at 3 in the headline, you can still lose if your opponent’s headline degrades DEFCON ahead of Missile Envy. For example, as USSR, you might pull We Will Bury You when the US headlined Grain Sales to Soviets.  Alternatively, as US, you might pull Duck & Cover or Soviets Shoot Down KAL-007 when the USSR headlined We Will Bury You.  (It is also conceivable, though staggeringly unlikely, that Missile Envy pulls Olympic Games or Summit, both of which can also degrade DEFCON.)

Aside from DEFCON suicide, it is also possible (though extremely rare) that the event you pull with Missile Envy is harmful to you.  For instance, Nuclear Test Ban might raise DEFCON at a point when you want to lower it.  In general, as long as either We Will Bury You (for USSR) or Duck and Cover/Soviets Shoot Down KAL-007 (for US) are out of the game, then I don’t worry about the possibility of losing the game via Missile Envy, especially in the headline, and especially if I’m the US (since the USSR rarely lowers DEFCON in headline).

2. You are forced to trigger a meaningless event.

The second-worst possible outcome.  More commonly happens to the US: US/Japan Defense Pact and NATO are the best examples.  Arms Race is often a wash as well.  This rarely happens to the USSR as its high Ops events are almost always useful.

Even in this situation, I still consider Missile Envy a net plus, since you’ve eliminated a high Ops card from your opponent’s hand.

3. You trigger a event good for you.

Generally the second-best possible outcome, depending on how good the event is.  Most of the really good events have high Ops, and so the possibilities range from Red Scare/Purge, ABM Treaty, Muslim Revolution, or Marshall Plan, to Brezhnev Doctrine, Bear Trap, Ussuri River Skirmish, or OPEC.  Of course, maybe you trigger something that is only speculatively helpful, like Flower Power, but in general, your high Ops events are good to trigger in exchange for 2 Ops.

4. You get to conduct Operations.

I consider this generally the best possible outcome.  Not only can you conduct operations in the headline, but you’ve also eliminated a high Ops event (a potentially powerful opponent’s event) from your opponent’s hand.  Taking Muslim Revolution and turning it into a no-strings-attached 4 Ops US coup is a gamechanger.

[The above analysis, incidentally, illustrates that I usually try to hand over their event or a neutral event rather than my own event.]

The second half of Missile Envy is usually just as strong: the fact that you force your opponent into a 2 Ops play on AR1 is very exploitable.  For example, as US, when you headline Missile Envy, the USSR is now forced to either coup with a 2 Ops or let you coup. Not a big deal if he’s couping Zaire, but a real discomfort if he was counting on a big coup to get into South America.  Conversely, the USSR can headline Missile Envy then make an AR1 play for a battleground knowing that the US response can only be 2 Ops.

In general I do not use Missile Envy during the middle of the turn, first because DEFCON is already 2 (furthering the risk of nuclear suicide), and second because the opponent will have already used high Ops cards, and I’m no longer assured of a 3 or 4 Ops card.

Missile Envy may combo well if you know your opponent’s hand already (i.e., you headlined CIA Created or Lone Gunman), since you can have an idea of what you will be getting.

This entry was posted in Mid War, Neutral Events and tagged missile envy. Bookmark the permalink.