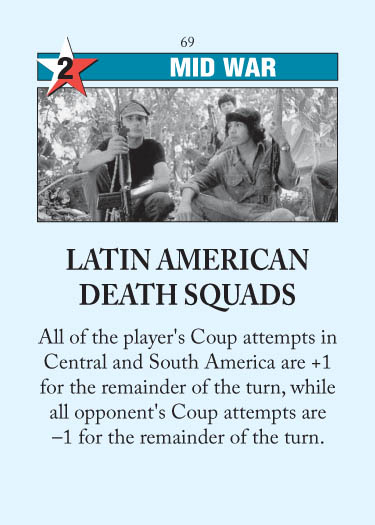 Throughout the Cold War, both left and rightwing governments supported reactionary regimes that resorted to disproportionate force when reacting to threats to that government. While this was a particular penchant of rightwing governments in Latin America, leftist governments also proved their deft use of brutality. El Salvador, Guatemala, and Columbia remain the most harrowing examples of the practice of government sponsored murder. President Osorio of Guatemala once infamously remarked “If it is necessary to turn the country into a graveyard in order to pacify it, I will not hesitate to do so.”

Time: Mid War
Side: Neutral
Ops: 2
Removed after event: No

A somewhat speculative headline, Latin American Death Squads is most useful when engaged in a battle for Central America (as the coup targets are better than in South America).  It can also be used as a prophylactic defense for one of your battlegrounds in case your opponent gets the battleground coup.

The main limit to its usefulness is that you don’t really need that many non-battleground coups.  Therefore, events that allow more battleground coups by either side (SALT Negotiations, How I Learned to Stop Worrying, ABM Treaty, Nuclear Subs, etc.) all make LADS more useful, provided that South America/Central America is yet to be scored.