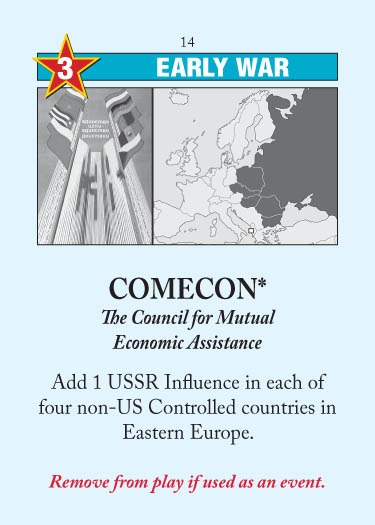 The Council for Mutual Economic Assistance (COMECON) was founded in reaction to the allure of the Marshall Plan to the Soviet satellites in Eastern Europe. While very loosely organized and dominated by the Soviets in its early years, COMECON would ultimately fulfill the role of trade liberalization and industrial rationalization for Eastern Europe.

About this event’s only use is the Turn 1 Comecon Trap.  As described here, a proper opening setup + headline of Comecon combo allows a AR1 realignment of both West Germany and Italy at +1.  It’s risky and prone to US counterplay in Austria, but with a little bit of luck can eliminate the US from continental Europe entirely.

Aside from this edge case, I always play Comecon for Ops.  The 4 influence is so scattered and usually so irrelevant that I have never seen any competent USSR player play this for the event.  It’s still nice to have around in the Late War if you come under Chernobyl in Europe, but it’s no Warsaw Pact.

When the US plays it, my targets for influence, in descending order, are: Poland, East Germany, Yugoslavia (assuming I opened with 4 EGER / 4 POL / 1 YUG), and Czechoslovakia (to defend against eventual Tear Down This Wall realignments).  But it’s mostly moot, since this influence will probably get De-Stalinized anyway.

This is basically a free 3 Ops card.  I suppose you could hold off on playing this until after De-Stalinization, but harmless 3 Ops cards are hard to come by as US in the Early War.

This entry was posted in Early War, USSR Events and tagged comecon. Bookmark the permalink.