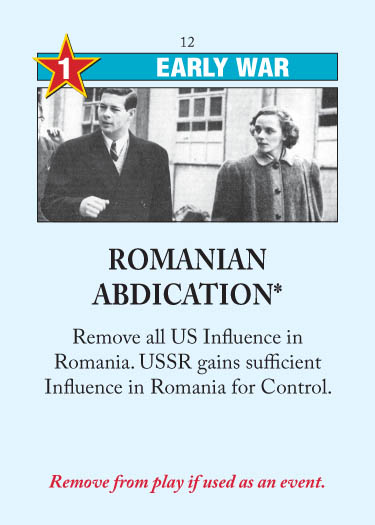 King Michael I, a westernized monarch, was forced to abdicate his throne at gunpoint. Romania was thereafter declared a democratic socialist republic. After the death of its first communist leader, Gheorghiu-Dej, Romania was ruled by Nicolae Ceausescu, second only to Stalin in cruelty to his own people.

An unimportant event.  No decent US player contests Romania, and so this card is always played for Ops.  Occasionally it might be headlined, if you’re deathly afraid of Defectors and have nothing better to dump, or if you need a European non-battleground ASAP.

The only thing to keep an eye out for is Independent Reds.  You’ll almost always want to trigger Independent Reds first rather than give the US 3 influence in a country bordering the USSR.  This is especially true if Truman Doctrine is not out, since the US would have the option of playing to take Romania and +1VP each time Europe Scoring comes out.

I’m happy to play this as soon as I can, so that Independent Reds can be merely situational instead of worthless.  Although the Romania Abdication/Independent Reds/Truman Doctrine combo is nice, it’s not worth it to pursue it on your own.  If you play Romanian Abdication, and the USSR plays Independent Reds later, then hey, why not Truman away the 3 influence for Romania.  But it’s otherwise not worth 3 Ops and 2 Action Rounds to score +1 VP on Europe Scoring.

This entry was posted in Early War, USSR Events and tagged romanian abdication. Bookmark the permalink.