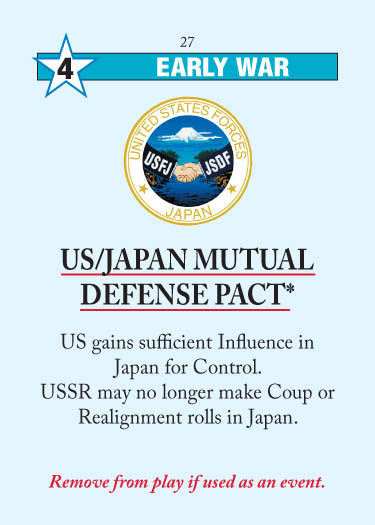 On September 8th the United States quietly extended its nuclear umbrella to its former Pacific rival. In doing so, it also soothed the nerves of Japan’s neighbors about a remilitarized Japan appearing on the world scene. In exchange, Japan played host to America’s forward presence in Asia. Japan effectively became an unsinkable aircraft carrier for both the Vietnam and Korean wars. Obviously, US reliance on Japanese products during the ensuing conflicts greatly aided Japan’s economic recovery and eventual economic might.

Time: Early War
Side: US
Ops: 4
Removed after event: Yes

It doesn’t take very long for a USSR player to learn that Japan is not a very communist-friendly country.  Given that you’ll never get Japan anyway, this card is usually just a free 4 Ops card, though it can be rather annoying if you’re trying to use those 4 Ops to take over some other Asia battleground!  Of course, if the US has already taken Japan for some reason, then it is a truly free 4 Ops card because you were never going to coup or realign Japan anyway.

The two interactions worth noting: if you have Asia Scoring/Korean War (or know that Asia Scoring/Korean War is going to be triggered this turn), it is obviously to your advantage to hold onto US/Japan until after those are played.  I have had situations where the US player is forced to score a Asia Domination for me on his final Action Round because he thought I would play US/Japan for him.

There is one situation where you might try to defy the Defense Pact: if US/Japan is discarded on Turn 3, Asia Scoring has yet to come out, and Japan remains at 1/0, it may be worthwhile to steal a Asia Domination by taking Japan with the China card.  After all, if Japan gets you Domination (or denies it to the US), then it’s worth a total of 6VP (4 for Domination, 1 for battleground, and 1 for adjacency).  There’s about a 50/50 chance that you’ll lose it all when US/Japan comes back out somewhere in Turns 7-10, but 6VP is a pretty big chunk of VP…

As a footnote, if you’re teaching the game to a new USSR player, you should absolutely advise him of the existence of this card, lest he be forced this lesson the hard way like so many other Soviet Premiers (including yours truly).

On Turns 1-2, the Ops are probably more important elsewhere than Japan.  But on Turn 3 you should use 3 of the Ops to take Japan and 1 Op elsewhere, to prevent the play described above.  All in all, it is a card you’d much rather have in the USSR hand.  Depending on where Asia Scoring is in the deck, though, you can’t just wait for US/Japan forever: if US control of Japan is what determines Domination, it is better to waste 3 Ops than lose 5VP…

This entry was posted in Early War, US Events and tagged us/japan mutual defense pact. Bookmark the permalink.