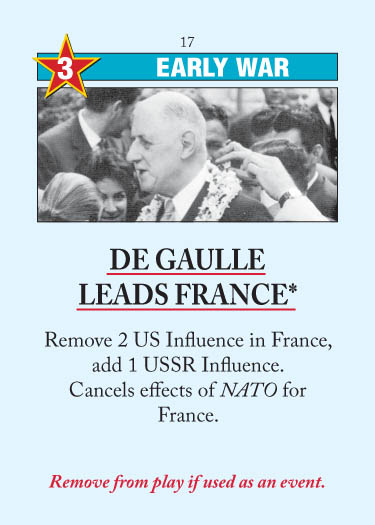 Founder of France’s Fifth Republic, De Gaulle’s role during the Cold War is generally viewed through the lens of his second presidency. While still a western ally, De Gaulle attempted to establish France as an independent voice within the confines of the western camp. He developed an independent nuclear deterrent, withdrew from NATO’s unified command structure, and criticized US policy in Vietnam. He also pursued increased trade and cultural relations with the Soviet Bloc. He sought in all things to restore France to her former place of greatness in world affairs.

France is the key to Europe Scoring, and generally represents a 6VP swing for whoever takes it.  (Usually only one side can score the +4 for Domination, and the country itself is a 2VP swing.)  De Gaulle is the most powerful event at your disposal for taking over the country.

If you already control France, then there is obviously no need to play De Gaulle.  Keep him around in the deck just in case the US tries any funny business in France.

If the US controls France, then you should remember that De Gaulle’s overall effect is just 3 Ops.  If you play him for the event on an Action Round, the US can repair its effect with a 3 Ops card and you’ve gotten nowhere.  A better use of De Gaulle is to take advantage of your headline-AR1 back-to-back combo: headline De Gaulle, then play Ops into France to take over the country on AR1.  You give up the battleground coup, but it’s worth it to flip France your way.

If no one controls France, the best way to take France is by gaining access to it via West Germany/Italy/Algeria, and then using the 3 Ops of De Gaulle himself to just take the country directly.  This keeps De Gaulle in the deck.  If you can’t do this, then the headline-AR1 combo still works, but again, you’re giving up a battleground coup.

Regardless, keep an eye out for Algeria.  Even if the US triggers De Gaulle and then repairs the damage, you can at least grab a key African battleground.

Regardless of the French situation, this is a great card to draw as the US.

If the USSR already controls France, that’s too bad, but then this card is a free 3 Ops, a rarity in the Early War.

If you already control France, then this is an empty Action Round, since you can repair De Gaulle’s damage with the 3 Ops.  (Note: spacing De Gaulle is not a great idea since you would rather dispose of him for no effect rather than allow him to come back and potentially hurt you more.)

And if France is empty, then you trigger the event and then pour the 3 Ops into France, making it 3/1.  The USSR is unable to control it with a single play, and thus may be wary of engaging in an Ops war if the threat of Truman Doctrine looms over his head.

The biggest concern with De Gaulle is that it allows the USSR access into Algeria.  Given the typical US Early War Ops scarcity, there’s not much you can do about this. If the USSR is distracted with other priorities, try to make sure that you take Algeria before he does.

De Gaulle becomes a serious liability if you are under Red Scare/Purge, because his Ops value no longer offsets the event.  If Purged, I would either try to hold De Gaulle until next turn, or simply accept that France is probably lost.  In such situations, it can be nice to play De Gaulle on your last Action Round, so that if the USSR wants to capitalize off of it, he at least has to do so during AR1, thus giving you a battleground coup.