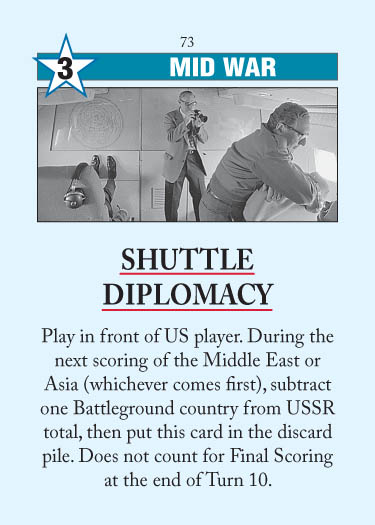 Personalized diplomacy that uses advances in transportation and communications, Shuttle Diplomacy was a hallmark of Henry Kissinger’s term as Secretary of State. Most famously, it was utilized to broker a cease-fire between Israel and Egypt after the Yom Kippur War. By acting as personal go-between for the Egyptians and Israelis, Kissinger maintained the pivotal role in discussions and minimized Soviet influence over the negotiation process. Kissinger utilized a similar style when dealing with the normalization of relations between the United States and the People’s Republic of China.

Time: Mid War
Side: US
Ops: 3
Removed after event: No

This event functions a lot like a US Flower Power, in that the USSR will usually just bite the bullet and trigger it, but the US will rarely find a reason to.  Unlike Flower Power, however, Shuttle Diplomacy is guaranteed to have an effect — at a minimum, it will cost you 1 VP.  Because both the Middle East and Asia have an even number of battlegrounds, nothing will usually happen if the USSR already has Domination and a 4-2 advantage in battlegrounds.  But if you are tied 3-3 on battlegrounds, then Shuttle Diplomacy will often give the US Domination (usually the worst case scenario).

In summary, the possible outcomes for Shuttle Diplomacy are:

I’m therefore OK with playing Shuttle Diplomacy for the Ops.  It is pretty far down the list in terms of Space Race priority unless I know for sure that it will affect the next Domination.  Usually at least one of the two regions should only be a 1VP swing.

Generally, you would rather Shuttle Diplomacy get triggered on the Middle East.  Not only is the potential Domination swing smaller, it is also more likely to have no effect on Domination in the first place.

Like the USSR and Flower Power, it’s hard to find a reason for the US to play Shuttle Diplomacy for the event.  3 Ops are immediately useful, whereas the event’s benefit is speculative and uncertain unless you also have the scoring card in hand.  It is most effective when the battlegrounds are tied 3-3, but even then, depending on non-battlegrounds, it still may not affect Domination.  And even if it affects Domination this turn, it may no longer by the time either of the scoring cards is played.

This entry was posted in Mid War, US Events and tagged shuttle diplomacy. Bookmark the permalink.