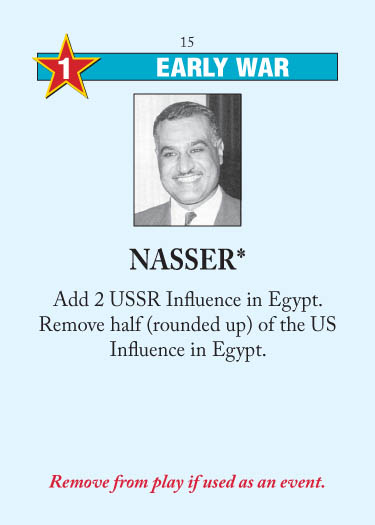 One of the giants in the Pan-Arab movement, Gamal Abdel Nasser rose to power through military coup. Attempting to steer an independent course during the Cold War, he provoked western governments by accepting Soviet aid, and nationalizing commercial property—the Suez Canal being the most prominent example. Egypt, under his leadership, was viewed as a Soviet client, and would serve as a Russian proxy during repeated wars with Israel. He died in office after 18 years of service, having frustrated the attempts of a variety of domestic and international enemies.

The rare Early War starred event that is actually quite worth playing by the USSR.  Nasser delivers to you a critical battleground and access to Libya, which ordinarily takes too long to get to.  The best use of this event is before the US has had a chance to put 2 into Egypt, because then it will cut the US off from Libya and essentially gain you two battlegrounds.

If Nasser isn’t important — either because you got into Egypt via a coup or the US has locked up both Egypt and Libya — then the normal rules about preserving your starred events apply.  No need to use this if you could potentially give the US a headache and counter the effects of Sadat Expels Soviets.  This isn’t to say that you shouldn’t fight for Eygpt: the Middle East will be scored quite a bit, and you don’t want to miss out on Egypt/Libya battlegrounds if you don’t have to.

Nasser means you lose Egypt for the Early War.  But there’s no reason to lose Libya as well.  Accept the loss of Egypt and bide your time waiting for Sadat Expels Soviets.  In the meantime, make sure you can get to Libya and secure it. Put 2 into Egypt, so that even if the USSR plays Nasser you’re not completely out of Egypt and have at least one AR where Egypt is 1/2 rather than 0/2.  This allows you to either control Libya or retake Egypt.

If you drew Nasser, his best use is probably on the final AR, after having locked up Libya: you use Nasser and put Egypt to 1/2.  Now the USSR has three options: 1) coup Egypt, 2) coup elsewhere, 3) control Egypt.  No matter what, you end up getting an advantage somewhere: you save a more important country from being couped, you get to retake Egypt, or you get to coup.  It’s a variant on the typical break-USSR-control-on-final-AR play.

This entry was posted in Early War, USSR Events and tagged nasser. Bookmark the permalink.