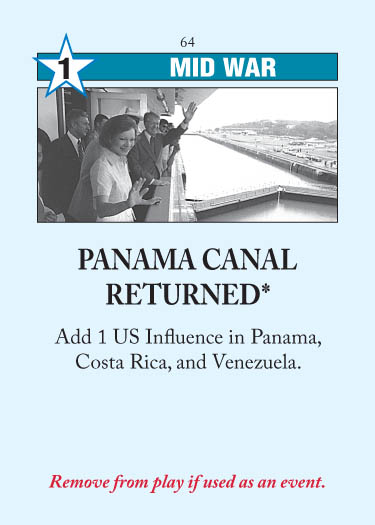 Though widely criticized by the right domestically, the Carter administration’s decision to turn over the Panama Canal to Panama proved immensely popular with Latin America. The Canal was a vital strategic link for the United States navy both during the First and Second World Wars. However, by the time of the Korean War, the canal was no longer large enough to accommodate contemporary warships. With its utility to the U.S. military greatly diminished, while its propaganda value as a relic of American imperialism still on the rise, Carter realized that gradual hand-over of the canal was the best policy alternative.

Time: Mid War
Side: US
Ops: 1
Removed after event: Yes

In many ways this is similar to Allende, with sides reversed.  If the US is already in South America, then it’s not a big deal: maybe buff up Panama/Venezuela a little bit before playing this, or don’t even bother if the US already controls both of those countries.  (Who cares about Costa Rica?)

But if the US isn’t in South America, and especially if you don’t yet have the region locked down, this is hugely problematic.  You could theoretically use the 1 Op to realign the US out of Venezuela, but your odds of success are only 27.78%.  A better use is often to headline Panama Canal Returned, and then try to coup Venezuela on AR1 (or, if you are concerned about the US dropping DEFCON in the headline, use the 1 Op of Panama Canal Returned on AR1 to coup Venezuela, but with only 1/2 chance of success).

I normally use this for the event only when I need to establish access to South America, though of course I will be careful to do so only at DEFCON 2.  It can also be useful as an AR7 play to break USSR control of Venezuela or Panama (preferably both).

This entry was posted in Mid War, US Events and tagged panama canal returned. Bookmark the permalink.